Work on tuberous sclerosis at the Institute of Medical Genetics in Cardiff started when Julian Sampson moved there from Glasgow in 1989, bringing his research with him. At that time the genetic basis of tuberous sclerosis was unknown but his work in Glasgow had shown that while a gene on chromosome 9 (still unidentified at this time) appeared to be the cause in some affected families, another gene on a different chromosome had to be the cause in others. Over the next eight years he built up a research team including Mark Nellist, Phill Cater, Al Jones, Russell Snell and Jeremy Cheadle to identify both genes. They worked in collaboration with others in the UK, Portugal, the Netherlands and the USA. The TSA was a critical partner in the work, providing funding and helping to bring the research to the attention of people and families affected by tuberous sclerosis so that they could provide essential blood samples.

The work was successful: the TSC2 gene on chromosome 16 was identified in 1993 and the TSC1 gene on chromosome 9 in 1997. The identification of the genes led to two advances. First, it led to accurate genetic tests for tuberous sclerosis. Cardiff became a leading centre for these tests, with Peter Davies in particular developing and providing tests for the NHS and internationally for some twenty other countries.  Second, the research showed that the TSC1 and TSC2 genes encoded proteins that were likely to function as a “GTPase activating protein” complex.

But what this complex did remained unknown until a further breakthrough was made by Dr Andy Tee and his colleagues in 2003. Earlier, during his PhD, Andy had been trained to work with mammalian Target of Rapamycin (mTOR), a protein that controls the size of cells. Andy was then awarded funding via a European research grant to use his mTOR expertise to study tuberous sclerosis at Harvard University in Boston, USA. It was a highly collaborative and productive time and lead to the discovery that cells with mutations within the TSC1 and TSC2 genes had uncontrollable levels of mTOR activity. It was these uncontrolled levels of mTOR that led to the clinical features of tuberous sclerosis.

Julian and Andy met up at a conference in the USA shortly after Andy had made his breakthrough. Talking over the potential to link their interests in tuberous sclerosis led to Andy making a successful and large funding application to the Association for International Cancer Research to move his work to the Institute of Medical Genetics in Cardiff and establish his own team there.

With attention now turned to mTOR as a potential drug target to treat tuberous sclerosis, it was serendipity that there was an existing drug that blocked mTOR. This was originally found in the soil of Easter Island, or as the native population call it, Rapa Nui, and it had therefore been named rapamycin. Its commercial formulation was called sirolimus. Trials of sirolimus treatment for people with tuberous sclerosis-associated tumours (angiomyolipomas) were swiftly planned. One of the first was TESSTAL: a trial of sirolmus treatment for kidney angiomyolipomas in patients with tuberous sclerosis or the closely related lung disease, sporadic LAM. Julian recruited Dr Mark Davies as a Research Fellow to treat patients throughout the trial. The Tuberous Sclerosis Association helped to fund the trial and (with help from the late Ann Hunt) to bring together collaborators with a range of relevant expertise including Dr Chris Kingswood, a TS and kidney specialist from Brighton, Professor Anne Tattersfield and Dr Simon Johnson, LAM specialists from Nottingham and Professor Petrus de Vries, a child psychiatrist then working in Cambridge. The trial was a major success as over two years the kidney tumours shrank in all the patients treated with the drug. The results helped to pave the way for bigger international trials of a closely related drug everolimus (votubia) which is now in routine use for the treatment of tuberous sclerosis tumours. Findings in relation to the learning and memory also provided the impetus to find out whether everolimus might be effective for difficulties in these areas in people with tuberous sclerosis. This question is being addressed in the current TRON clinical trial, again led from the Institute of Medical Genetics. Dr Anurag Saxena is the clinical research fellow involved and Emer McDermott and Laura Stockwell are the TRON trial psychologists.

While sirolimus and everolimus are effective in shrinking tuberous sclerosis associated tumours, the tumours  do not usually disappear completely during treatment with these drugs and regrow if treatment is stopped. The search continues for even better drugs. Dr Andy Tee’s team are using models including cultures of cells and miniature tumours grown in the laboratory to gain a more complete understanding of the cellular mechanisms involved. Andy has linked up with several pharma companies to conduct this work and is applying their new drugs to the targets his work is identifying. The efficacy and toxicity of potential drug treatments are then assessed in more detail by Dr Ming Hong Shen’s team who are also testing whether drugs can be used to prevent as well as to treat the manifestations of tuberous sclerosis. The Tuberous Sclerosis Association remains an essential research partner, helping to fund the research and to set priorities according to the needs of affected people.

Meanwhile, away from the research laboratory, the first specialist clinic in the NHS in Wales dedicated to tuberous sclerosis was started at the Institute of Medical Genetics in 2015. Patients are seen by Prof Julian Sampson (genetics specialist), Dr Anruag Saxena (paediatric neurology specialist) and Dr Mark Davies (oncology specialist) and may also be referred to other specialists to help ensure they receive best possible treatment. Patients coming to the clinic also have the opportunity to get involved in research studies – both those run by the Cardiff group and those based elsewhere – if they wish. 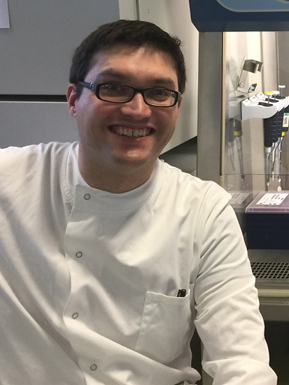